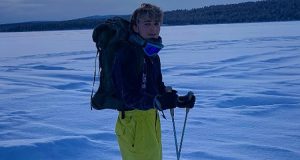 In December 2019, for three days, I, along with three prep school friends, travelled to the Northern-most reaches of Sweden and into the Arctic Circle to take part in an event called the 50-4-50 Arctic Challenge, run by Old Stoic Charlie Perring (Chatham 87). The Challenge was a combination of husky dog and Nordic ski racing along with some survival challenges, with all three teams raising money for Tusk Trust.

After reaching just over £11,500 with the initial aim of £8,000, we arrived achieving the highest a team has raised in the history of them running this event. This was short lived when a corporate team arrived raising £15,000 but it was nice to have that title for those few seconds! For the fundraising, special thanks must go to Will Fortescue (www.willfortescue.co.uk) who donated one of his amazing prints towards the raffle we held across Newcastle, Glasgow and Exeter.

On arrival, we faced temperatures of -22 degrees which froze up what was a runny nose but also froze up my hands and feet! After getting on the huskies for 17km (not included in the race), we made it to our lodge which had no electricity or running water! The loo was also outside so that was rather nippy!

The next day, we had the time trials for the husky race, which was over 40km. Here, we had to harness up all the dogs and set off so it was a test for who could remember what we did the night before. Sounds easy but not when it is that cold! Setting off first, we were sledding through the Boreal forest and over frozen lakes yet, unfortunately, with three guys making up the team, the dogs were tested to a great extent, so we were soon coming 2nd but luckily held our position for the rest of the race. For the remainder of the day, we were outside building snow shelters and making fires, with the added excitement of accidentally walking, along with another team, onto a lake. After ringing Charlie to ask for directions, the shocked Charlie told us to get off ASAP.

The third day, the day of Nordic skiing, started off rather warm at -12 degrees and, as long as we kept moving, all was fine. This along with my competitive side really pushed us along, with a team mate, Max, and I getting 30 minutes in-between us and the next person.

Unbeknownst to us, we had a few missed calls from the two team mates we had left behind. It was bad news, Josh (the most experienced skier of us four) had fallen and dislocated and broken his shoulder (at the time of writing, he is currently awaiting surgery) leaving Mimi (the worst skier, and she wouldn’t mind me saying that) on her own. To win the skiing, Mimi had to finish in-front of the other team’s back-marker by two minutes. It was tense but luckily she joined up Max and I at the half way point and we crossed the line together.

The skiing was very tough, using all the muscles in the body, from the legs to the arms and back, but we won! Of the other teams, two people dropped out and whilst we were 30 minutes into our late lunch, the final team had arrived. All in all, a great day for us!

Unfortunately, after coming second in the fundraising, we lost to the corporate team Forevermark.

I will be going out again this year but this time to be part of the Drift Adventure Directing Staff where we hope to see more companies put forward their best to take home the trophy!

If you are interested in taking part in 2021, head to www.driftadventure.co.uk/drifts-adventures  and we are still looking for anymore donations that can help get us to the nice round number of £12,000. If you do want to donate, please head to uk.virginmoneygiving.com/fundraiser display/showROFundraiserPage