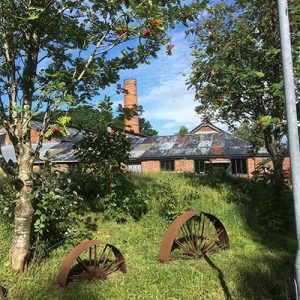 Carolyne writes, “The English have had an on/off love affair with bricks for the last 600 years or so. It was definitely an ‘on’ period after the Great Fire of London – bricks were much cheaper than stone and didn’t burn. We went off them a little around about the time Stowe was built. We liked them for building with (there are thousands hidden in the walls) but covered them with stone facings so as not to see them. The Georgians brought bricks back out into the open again but by the Regency period, we were hiding them once more behind plaster. Today we like them again and most of the new houses built in the country appear to be built of brick, even architects are using them in their designs once more. The Brickworks Museum, near Southampton, is a unique survivor from our brickmaking history, the only complete steam driven factory left in the country. The large building complex is just how it was when it was built, having never been updated during its long working life. The men who were working there in the 1970s were making bricks in the same way as their Victorian forefathers. With the help of a Heritage Lottery Fund grant in 2012/13 the Factory was turned into a museum and now has one of the largest collections of bricks and brickmaking artefacts. It is run by volunteers and is opened three days a week from April to October (too cold in the winter months) with special ‘steam up’ events once a month. The aim is to become The Museum of Bricks and Brickmaking in the country to celebrate this rather forgotten part of our history. To ensure the future survival of the museum the New Foundations Project has just been launched. This will restore two of the Grade II listed drying sheds to create a community business hub. All the income from the business units will be ploughed back into the museum and provide much needed financial security. If you can help in any way please do get in touch via our website: www.bursledonbrickworks.org.uk. I was one of the first five girls at Stowe. I only did one year and studied Art and English. This was so I could change from sciences to arts. After leaving Stowe, I trained as an architect and worked in the industry for over 15 years. I began to specialise and spent time working with small community groups facilitating projects. Eventually I stopped acting as the architect and became the project manager/fundraiser. The Brickworks is my most recent project and I have been involved since obtaining the first HLF grant.”