By Prince Michael of Greece 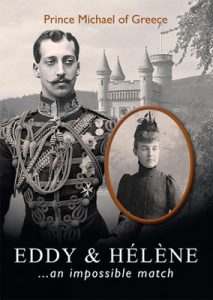 Opening Prince Michael of Greece’s book, Eddy and Hélène… an impossible match, I saw inside an old photo of the South Front, and began to realise that Stowe House was a key location in the courtship of a daughter of the exiled Count of Paris who was renting the ‘immense and glacial mansion’ from the Duke of Buckingham. The daughter in question was the Roman Catholic Princess Hélène and the object of her affections was Prince Albert Victor (Eddy) the eldest son of the future King Edward VII and from birth, second in line of succession to the British throne. The Count and his family had become close friends of Queen Victoria, so it was inevitable the couple should meet.

Most of the book contains the love letters that Eddy wrote to Hélène which the author had chanced upon in a garage of one of his relatives. Enhancing these, the author has skilfully included the few letters that Hélène wrote, extracts from the Royal Archives and letters from others involved, so that the reader can chart the events of this doomed courtship. The big surprise comes with the contents of Eddy’s letters which, for one who has been written off by most historians (and some contemporaries) as a dullard, are cognisant, full of detail and reflecting his growing feelings for Hélène.

Eddy’s first letter to Hélène was written on December 1890 but, by May 1891, Hélène wrote to Eddy from Stowe House breaking off the courtship (it was never more than that). Despite the support for the marriage from Eddy’s mother and two of his sisters and a qualified blessing from Queen Victoria, Hélène’s Catholic religion proved the insurmountable problem for a potential Queen of England. Four months after Hélène’s final letter, Eddy was engaged to Princess Mary (May) of Teck and a few months later Eddy was dead, having murmured Hélène’s name in his final moments. In their grief his family sought to support Hélène for her loss and his sisters never forgave May for not being the bride that they had wished for. Although Queen Victoria had strongly supported May’s candidature as Eddy’s bride, nevertheless she continued to take a touching interest in Hélène’s welfare. In all this whirlwind courtship, she was the only one who had kept her head.

For anyone who is interested in royal history of this period this gem of a book is a ‘must have’ as not only does it call for a possible reassessment of Eddy’s character but that of Queen Victoria herself.