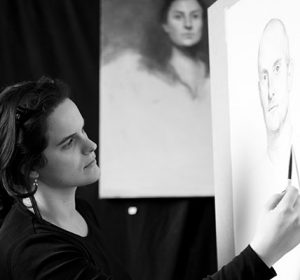 Old Stoic Artist, Anna Clare Lees-Buckley (Nugent 05), shares her latest work and explains how her artistic career has developed since her time at Stowe.

Anna Clare’s interest in art began at an early age. Saturday mornings were spent at Mrs James’ pottery classes in Chelsea where, within a year or two, she had built up an impressive collection of squashed tortoises, misshapen bowls and a terrifying mask of her mother.

By the time she reached Stowe, as an art scholar, her artistic interests had widened to include painting and other aspects of the creative arts. This education continued during four years at an atelier in Florence, where she practised the naturalistic tradition of sight-size.

Moving back to England in 2009, Anna Clare began her career in portraiture, working on commissions from St Paul’s studio, on Talgarth Road. More recently, she has started specialising in game birds; embarking on a large scale series of game birds in flight.

Although brought up in London, she spent many weekends in the country, often staying with her godfather’s family in Berkshire. She was occasionally allowed to go on pheasant shoots, strictly as an observer and under supervision. This privilege came to an abrupt end when, aged 8, she and an equally mischievous friend called Becky, decided that it would be fun to stay behind in the Land Rover, take off all their clothes and have a singsong. Despite this setback, a love of the British landscape, together with its native wildlife was already developing.

If you walk into Anna Clare’s studio, there will always be a selection of works in progress, from in-flight grouse to a covey of huddled grey partridge in the snow. At present, there is a large scale pair of hen harrier mid-flight, capturing the strength and grace of these magnificent birds.

Her painting style acknowledges the classical training received in Florence, whilst applying a more modern approach. The beauty of these birds, seen at close range, is breathtaking; the detail and colour variations in their plumage make for truly arresting images.

Painting birds can be a solitary occupation but how many people can enjoy listening to a Rachmaninov piano concerto or to Jilly Cooper’s latest novel while they work? Daisy, the English bull terrier, is often there, too, making a delightful studio companion and, on occasion, reluctant model!

In 2018, Anna Clare exhibited at the Rountree Tryon Gallery. She is currently working towards her first solo show at the end of 2019.

Please get in touch if you would like an invitation to the show, to commission a painting, or visit her studio.