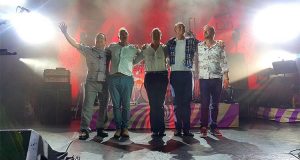 Lee writes, “After many years playing and managing the late Ian Dury’s old band, The Blockheads, I left them four years ago to get married and move to the far South of France where my wife and I now run a successful rental business. Practically anyone who was at school when I was, will remember me as a guitar player and the fact that I used to play Pink Floyd music at all the concerts I organised. This year I instigated a band around the Floyd’s drummer and it is called Nick Mason’s Saucerful Of Secrets and I play guitar in it along with Gary Kemp, Floyd bassist Guy Pratt, Dom Beken and of course Nick. We finished a sold out tour of Europe in September. Many Old Stoic friends came to see us including Angela Christodoulou (née Klat, Nugent 91), Rob Langford (Cobham 91), David Langford (Cobham 95), Stephen Barham (Cobham 94), Justin King (Cobham 90), Ola Nathan-Marsh (Cobham 90) and Sebastian Hennessy (Lyttelton 92). We are going back out on the road next year.”