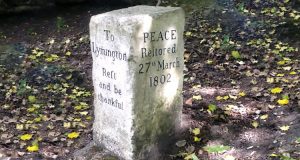 On one of my occasional visits to Hampshire, I passed through the New Forest village of Burley. I noticed a milestone by the roadside, which seemed to have more than the usual towns and distances. The side facing the village read, ‘To Lyndhurst’, the side facing the road, ‘To Lymington, Rest and be thankful’.  On the side facing away from the village, ‘Peace Restored’ and  ‘27th March 1802’. The fourth side was blank. I had little or no idea what this was all about.

In the 18th and 19th Centuries, the popularisation of the South Coast led to a demand for better roads or turnpikes. Later on, the railways took much of the trade but many of the old mile markers remain.  A few iron markers are dated but none that I know of bear sentiments.

My wife’s ‘smartphone’ soon suggested an answer – the date was that of The Treaty of Amiens, which was signed by Great Britain (Lord Cornwallis), Joseph Bonaparte, (Napoleon’s brother). Also by representatives of Spain and the Batavian Republic (now part of the Netherlands). The Treaty eventually led to Napoleon’s arrest and exile to the Italian island of Elba. His escape from there in 1804 had dire consequences for the allies and led once again to the battlefields of Europe. In fact, it was the young Duke of Buckingham who sallied forth and led The Bucks Militia to serve under Wellington at Waterloo. They were not asked to commit themselves to the main battle.

But all that would be in the future for my stone, or so I thought.

Meanwhile at Amiens, Great Britain agreed that France should become a republic and that fighting between these countries should cease from thereon. Amongst the remaining clauses was one regarding Egypt. It stated that all British troops should withdraw from that country. They had been there since the Royal Navy had defeated the French Fleet at the Battle of the Nile 1798. Despite signing the Treaty, Britain reneged and the British Army stayed incredibly until after the Suez Crisis of 1956!

Napoleon’s escape from Elba was greeted by his ‘Old Guard’.  They marched to Paris where he crowned himself Emperor amid large numbers of supporters.

Britain had been at war with France since 1793, so this 1802 treaty was a massive relief to this country and there was general rejoicing. Various ways of celebrating the occasion were devised. In Stowe’s case it called for a rather difficult construction job. Despite the treaty’s great importance, it is unknown to most people today.

This lack of interest must be explained by the fact that ‘La Paix d’Amiens’ did not endure, indeed it was eclipsed by Napoleon’s later battles concluding with Waterloo and finally his demise on St Helena.

When the news of the escape reached Stowe, there was great dismay. However George Grenville, the Marquess of Buckingham had already completed his monument to Britain’s military might, at sea and on land.

Within the base of Vanburgh’s North Portico and the adjoining basement of North Hall he had formed a porte cochere and a stove-heated Reception Hall. The style just had to be Egyptian. It was based on the Temple of Tintyra. Not only was Egypt and everything pertaining to Egypt fashionable (since the Battle of the Nile) but Baron Vivant-Denon’s 1802 book, Voyage dan la Basse et la Haute Egypte certainly inspired the plans and the details of the decoration. No longer would the Marquess’ guests and friends have to run the gauntlet of rain, ice and snow.

Indeed, the Egyptian Hall guards the winter entrance and delights all who see it. This dramatic and ornamental structure was the latest in a sequence of monuments intended to commemorate victories and discoveries.  These include The British Worthies and Lord Cobham surveying the surrounding landscape from his lofty tower. Captain Cook is remembered at Stowe for sailing the Seven Seas with his globe, and Major-General James Wolfe of Quebec, a family friend, has his heavily engraved obelisk.  Most important of all is the collection of battle honours within the Temple of Concord and Victory. Furthermore, the prevailing fashion of Egyptian decoration must have come after the construction of the Egyptian Hall as Stowe has always assertively led fashion rather than meekly following after it.

A simple stone mile marker may not be able to compete with Stowe’s grandeur but it did set me off on my own voyage of exploration!