Well, 2019 was a good year for discoveries for Stowe-X Rock Society devotees.

An early one was Antipodean singer/songwriter AMY SHARK who launched her latest album, Love Monster, at a sold out gig – vulnerable yet strong lyrics. Seriously impressive.

The iconic Queen of Punk PATTI SMITH gave an intriguing evening of songs and readings in what has become a rather historic event.

Early on in the year, we made two new interesting discoveries at the same gig: a duo AMBERLAKE and singer/songwriter LILI CASELEY. Both of them new to the gig circuit and both definitely ones to watch out for.

The prize for the most jaw-dropping stage persona must go to ANNA CALVI on her tour promoting her brilliant album Hunter – Drama with a capital ” D”!

The two foremost male newcomers on the tour circuit who are both making serious waves are SAM FENDER and LEWIS CAPALDI,

One of my favourite discoveries of the year has to be the exquisite ASTRAEA.

A singer/songwriter and pianist of mesmeric quality. The beauty of her songs and melodies are quite stunning. One particular song You’re Not Alone will be familiar to you as the background music to the Lloyds Bank TV commercial.

By way of a change, Stowe-x ventured out of town to visit The Cornbury Festival in Oxfordshire. Three days of being serenaded by KEANE, THE BEACH BOYS, WILDWOOD KIN, JJ ROSA, KT TUNSTALL and a myriad of other luminaries has me waiting in eager anticipation for the 2020 line-up!

MORGANWAY – an excellent band in the manner of “Rumours” era FLEETWOOD MAC.

DYLAN – our very own Tash Woods with a new stage name. 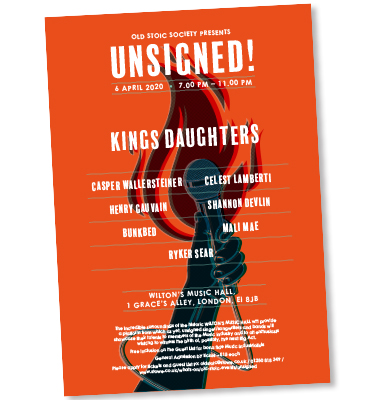 Finally, an event for your diaries! On Monday 6 April 2020, we shall be hosting an evening at Wilton’s Music Hall in Whitechapel for unsigned singer/songwriters and bands. This is to give them an opportunity to showcase their talents to members of the Music Industry, Music Press and PR. It is also open to friends and family and so please do join us.